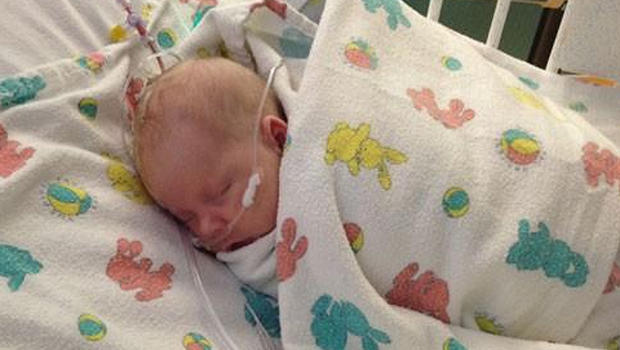 Thanks to some superglue, a weeks-old infant with a brain condition seems like she’ll go on to live a healthy life.

Dr. Koji Ebersole of Olathe, Kansas injected surgical superglue to stop a brain aneurysm from bursting inside Ashlyn Julian, who was 3 weeks old at the time. While superglue has been used in medicine for 30 to 40 years, including for aneurysmsrecently, Ebersole told CBS affiliate KCTV in Kansas City, Mo. that he believes this is the first time it was used on someone so young.

Ashlyn, who was born May 16, started acting strange shortly after she was taken home. Her mother, Gina Julian, decided to take her to the emergency room of Children’s Mercy Hospital to see what was wrong.

An ultrasound revealed that Ashlyn had a brain aneurysm, a blood-filled bulge that protrudes from a thin blood vessel. Doctors transferred Ashlyn to the University of Kansas Hospital, where they found the aneurysm had grown to the size of a walnut.

This condition occurs rarely in infants because aneurysms normally develop over years. The University of Kansas Hospital said to KCTV there have only been 17 cases since 1949 of infants younger than 4 weeks having the same issue. As a result, there are no tools to remove the problem for specifically infants. Doctors also believed that Ashlyn’s brain had bled twice before, and cutting into her brain to remove the aneurysm was not safe.

“If you try to treat the baby without closing the aneurysm, meaning conservative treatment, support the baby, and hope that the baby will heal itself, most of those babies won’t survive. So we had a strong reason to develop a plan to close the aneurysm,” Ebersole said.

Ebersole instead proposed using the smallest microcatheter, which is a tube as thin as a strand of hair. He put it into a blood vessel in Ashlyn’s hip and ran it through her body to the brain. Then, he injected superglue in order to stop the bleed. The glue was deposited before it set, which takes about 10 seconds. The whole procedure took 45 minutes.

Ebersole told the Kansas City Star that it’s the same superglue that you would find in a store.

“The only way I could close that aneurysm with that small of an instrument was with the glue,” Ebersole said to KCTV. “Our instruments are several feet long. I just needed a couple of inches to get the job done. . . . We were able to navigate through the twists and turns of her body and brain to get to the aneurysm.”

The surgery appeared to be successful, and Ashlyn had her breathing tube removed the next day. There was some worry that the procedure may have caused a small stroke that would affect her right leg, but she’s still able to move it freely. Although she is still in the hospital, Ashlyn is expected to make a full recovery, especially since her brain is not yet fully developed.

“It’s extremely favorable for the baby. We are thrilled we have given her the best chance to have a perfectly happy life,” Ebersole said. “I think it’s going to be a normal childhood.”